When performing a Vanquish action, Boarding Party may be used to defeat a Hero at their location or at an adjacent unlocked location.
Boarding Party is an Ally in Captain Hook's Villain deck.

It's most useful to play Boarding Party to Skull Rock or Mermaid Lagoon, where they can reach the most locations. Out of all of Captain Hook's Allies, these should be played earliest, as they are the most flexible.

The following cards in other Villains' decks are functionally the same (ignoring number of copies): 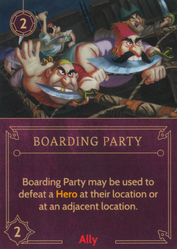