Disney Villainous Wiki
Register
Don't have an account?
Sign In
Advertisement
in: Captain Hook, Allies, The Worst Takes It All,
and 4 more

When Mr. Starkey is played, you may move a Hero from his location to an adjacent unlocked location.
Mr. Starkey is an Ally in Captain Hook's Villain deck.

This is most useful for moving Peter Pan out of Hangman's Tree. In conjunction with Ingenious Device, this card can move Peter Pan all the way to the Jolly Roger in a single turn, but this requires Ingenious Device having been played on a previous turn, which risks it being discarded by Splitting Headache. Alternatively, you could first play Mr. Starkey, then Ingenious Device on your next turn, for a two-turn win. 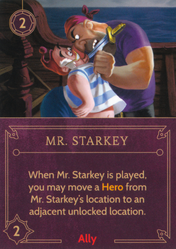