Disney Villainous Wiki
Register
Don't have an account?
Sign In
Advertisement
in: Captain Hook, Items, The Worst Takes It All,
and 3 more

Captain Hook cannot win without first playing this card. Discard aggressively until you find it. If you can't play a card on a turn, and it won't actively help you find Peter Pan (like Worthy Opponent) or move him to the Jolly Roger (like Ingenious Device), it should be discarded until you find the Never Land Map. After it's played, being able to play another Item for free is a nice consolation prize, but not a very big deal, as Captain Hook usually doesn't have a problem accumulating Power. 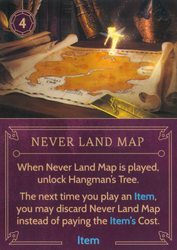