Disney Villainous Wiki
Register
Don't have an account?
Sign In
Advertisement
in: Captain Hook, Items, The Worst Takes It All, Cards changed in later printings

When Pixie Dust is played, attach it to a Hero. That Hero gets +2 Strength.
Pixie Dust is an Item in Captain Hook's Fate deck. It increases the Strength of a Hero in his Realm, making them harder to defeat.

Best used on Peter Pan or a Hero with Taunt, if possible. Failing that, try to put it on a Hero with an ongoing effect, like Wendy.

The following cards in other Villains' Fate decks are functionally the same (ignoring number of copies): 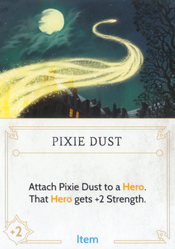