Disney Villainous Wiki
Register
Don't have an account?
Sign In
Advertisement
in: Prince John, Effects, The Worst Takes It All,
and 2 more

Steal from the Rich

Steal from the Rich

Take up to 4 Power from Prince John and put it on any one Hero. When that Hero is defeated, the Power is returned to Prince John.
Steal from the Rich is an Effect in Prince John's Fate deck.

The main way to stall Prince John's win condition. Playing against him, you should try to get one or two Heroes on his board (not too many, or his Beautiful, Lovely Taxes gets too powerful), so that there's always a target for Steal from the Rich. Try to pair with Clever Disguise for maximum effect. Multiple copies of this should be spread out across multiple Heroes, so Prince John doesn't get a massive payout from a single Vanquish action. 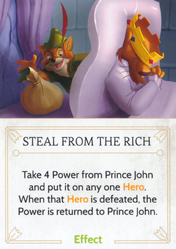