Disney Villainous Wiki
Register
Don't have an account?
Sign In
Advertisement
in: Captain Hook, Items, The Worst Takes It All,
and 2 more

When Taunt is played, attach it to a Hero. Captain Hook must defeat Heroes with Taunt before defeating other Heroes.
Taunt is an Item in Captain Hook's Fate deck.

The most powerful weapon in Captain Hook's Fate deck, as long as there is already a Hero in his Realm. It requires him to waste Vanquish actions on Heroes other than Peter Pan, delaying his win. However, if Peter Pan is the only Hero out, do not use this on him. All that will do will make the other Taunt pointless. 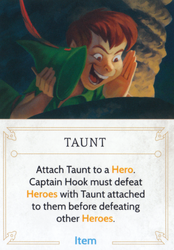