Disney Villainous Wiki
Register
Don't have an account?
Sign In
Advertisement
in: Captain Hook, Effects, The Worst Takes It All,
and 2 more

Gain 2 Power. Reveal cards from the top of your Fate deck until you reveal a Hero. Play that Hero and discard the rest.
Worthy Opponent is an Effect in Captain Hook's Villain deck. It is one way he has to manipulate his Fate deck in order to bring out Peter Pan.

Until Peter Pan is played, you should play this card at every opportunity. The sooner Peter Pan comes out of the Fate deck, the sooner you can win. The extra Power doesn't hurt, either. 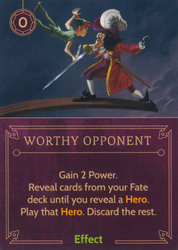